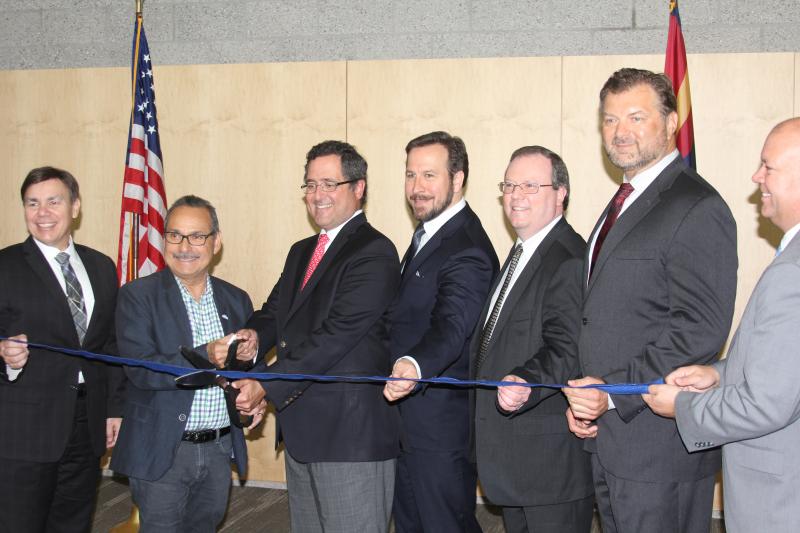 AQST Space Systems announced today the company is moving its headquarters from Puerto Rico to Mesa, Arizona. The company plans to manufacture and assemble rockets for small satellites and expects to begin production by the end of 2018.

The aerospace systems technologies solutions company has secured space for headquarters operations at Falcon Field Airport in the City of Mesa's Falcon District, and plans to acquire additional space for its manufacturing operations. AQST expects to hire up to 125 employees, including engineers, welders, technicians, satellite operators, data scientist managers and other support personnel over the next three years.

"When companies decide to move their headquarters to our state, it's a testament to the pro-business climate in Arizona," said Arizona Governor Doug Ducey. "AQST has confidence in Arizona and its workforce. We are proud they've decided to make Arizona their home, as they continue to grow their aerospace and defense company. We congratulate them and wish them success."

"Arizona has been very welcoming and good to us," said Arnaldo Soto, Jr., Chairman and CEO of AQST. "We especially like the collaboration exhibited by the aerospace and tech business community, led by Governor Doug Ducey's pro-prosperity agenda."

"I'd like to congratulate AQST on the relocation of their global headquarters and their exciting contribution to Arizona's thriving aerospace and defense industry," said Sandra Watson, President and CEO of the Arizona Commerce Authority. "We welcome the innovation and advanced manufacturing jobs AQST brings to our state and are proud we can continue to support this industry with a skilled and educated pipeline of talent."

"AQST is an exciting addition to both Mesa and Arizona's thriving tech industry," Mayor John Giles said. "Their decision to locate in Mesa is a great endorsement of our business-friendly environment and the forward-thinking, public investment in the Falcon District."

"AQST choosing the Falcon District for its new headquarters speaks volumes about Mesa's commitment to bringing in high tech companies to not only this area, but the entire City," District 5 Councilmember and Vice Mayor David Luna said. "AQST has invested not only financially, but in our community as a whole, bringing opportunities for our citizens."

"AQST Space Systems joins a robust ecosystem of aerospace companies in Greater Phoenix that have not only helped to shape our region's legacy industry but also our future growth potential," says Chris Camacho, President and CEO of Greater Phoenix Economic Council. "We thank them for their investment in the region and wish them ongoing success in Mesa."

About the Arizona Commerce Authority
The Arizona Commerce Authority (ACA) is the state's leading economic development organization with a streamlined mission to grow and strengthen Arizona's economy. The ACA uses a three-pronged approach to advance the overall economy: attract, expand, create - attract out-of-state companies to establish operations in Arizona; work with existing companies to expand their business in Arizona and beyond; and help entrepreneurs create new Arizona businesses in targeted industries. For more information, please visit www.azcommerce.com and follow the ACA on Twitter at @azcommerce.

About the City of Mesa
With a population of nearly 500,000, Mesa, Arizona is the 36th largest city in the United States and second largest in the Phoenix-Mesa metro area. Mesa encompasses 138 square miles inside a 21-city region that has a population of 4.3 million people, and is projected to grow to 6.0 million by 2030. Mesa is a vibrant city and a premier location for business development opportunities. Serving industry leaders such as Apple, Banner Health, Boeing, Bridgestone, Empire Southwest, MD Helicopters, Nammo Talley, Ulthera and more, Mesa is a smart location for intelligent companies. www.mesaaz.gov/economic

About the Greater Phoenix Economic Council
Established in 1989, the Greater Phoenix Economic Council (GPEC) actively works to attract and grow quality businesses and advocate for the competitiveness of Greater Phoenix. As the regional economic development organization, GPEC works with 22-member communities, Maricopa County and more than 150 private investors to accomplish its mission, and serve as a strategic partner to companies across the world as they expand or relocate. Consistently ranked as a top national economic development organization, GPEC's approach to connectivity extends beyond the fabric of the community. Known as The Connected Place, Greater Phoenix is in a relentless pursuit of innovative and entrepreneurial technology-focused companies that are committed to changing the game. As a result, GPEC has fueled the regional economy by bringing more than 740 locates, by creating more than 130,000 jobs and has contributed a capital investment of $14.8 billion over the past 29 years. For more information about GPEC, visit www.gpec.org or follow us on LinkedIn, Facebook and Twitter.