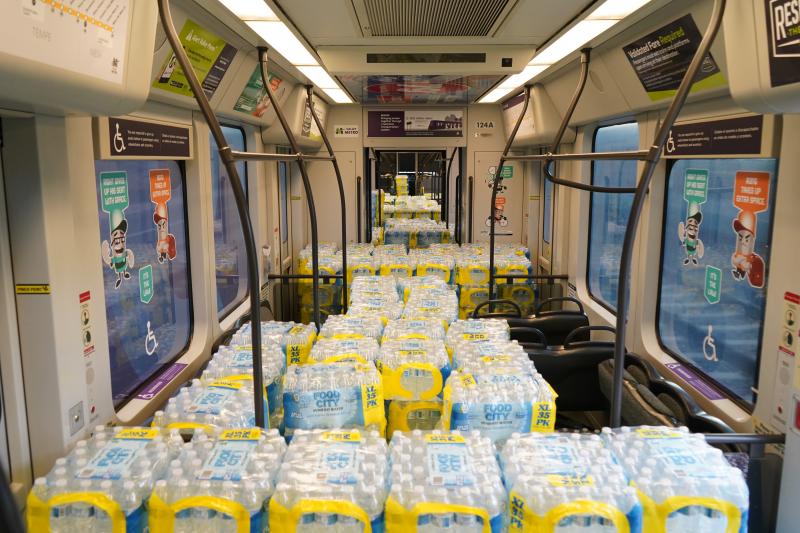 Thanks to amazing generosity from residents and businesses and numerous innovative ideas, more people in need benefited from the 13th Annual Mesa Hydration Donation Campaign, which ended Sept. 27.

"The Hydration Donation Campaign proves Mesa is a community filled with caring people who are willing to come together to support a tremendous cause," Mayor John Giles said. "I am extremely grateful for the efforts of various City departments, our community partners and residents who reached out during the extreme heat of the summer to help those in need."

The water donations were collected by Mesa Fire and Medical Department, United Food Bank, Paz de Cristo, A New Leaf, Mesa Chamber of Commerce and several City, nonprofit and business partners. The collections were achieved through a variety of methods:

Valley Metro and its project contractors Stacy & Witbeck Sundt donated 55 pallets or 115,500 bottles of water to United Food Bank after using the pallets instead of sandbags for safety testing for the Gilbert Road light rail extension.

More than 46,800 bottles of water were collected by City of Mesa employees during a Community Spirit donation drive the final month of the campaign.

The campaign kickoff included several donations, such as a semi truck containing 18 pallets of water from Walmart, more than 26,000 bottles from State Farm and four tons of water donated by the Mesa Chamber of Commerce Superstition Leads Group.

Amanda, a Mesa resident, collected 293 cases of water during a campaign in June in honor of her brother, who died of heat exhaustion after dirt biking with friends.

The Mesa One Ton Challenge, which challenged businesses, residents and organizations to buy a pallet of water, which weighs more than one ton, included more than two tons from Alpine Bread in celebration of their 100th anniversary.

"We are amazed and gratified by the response from the community during the Hydration Donation Campaign. It shows when you put a call to action in Mesa, the residents and community organizations really step up and deliver. This water has helped to keep so many people in our community hydrated this summer, and we truly owe it all to our community," United Food Bank President and CEO Dave Richins said.

The donated water is distributed by United Food Bank to numerous nonprofit organizations in Mesa and throughout the valley including Paz de Cristo and A New Leaf-East Valley Men's Center.