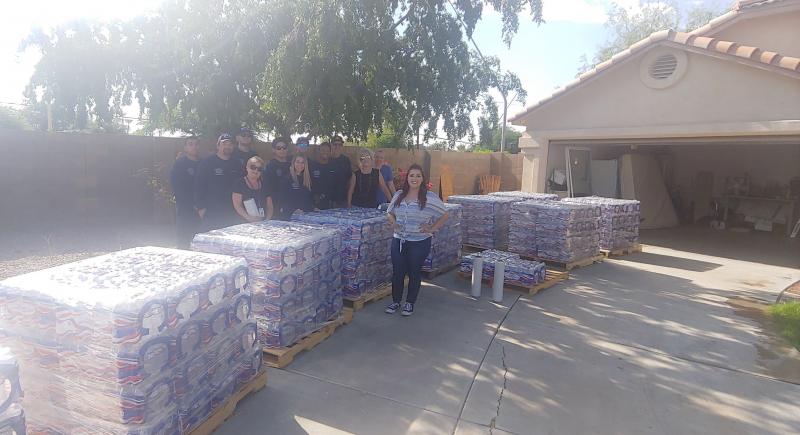 Thanks to the generosity of the community, the Mesa Hydration Donation Campaign has collected thousands of bottles of water to help people in need, including the homeless and unsheltered during the hot summer months. However, with less than seven weeks remaining in the campaign and temperatures exceeding triple digits daily, the need for donations is still critical. More than 134,000 bottles have been collected. The Campaign's goal is to collect 400,000 bottles of water by Friday, Sept. 25.

"With this summer being hotter than normal, plus the financial challenges of the pandemic, the need for the campaign is even more important this year," Mayor John Giles said. "I know Mesa residents, who are always so generous, will step up and help us with donations of bottles of water over the next few weeks to help those in need."

You can donate water at various drop-off locations throughout the City. A complete list of locations is available at www.mesaaz.gov/H2Omesa.

"The Hydration Donation Campaign is literally a life saver. Less than $5 buys a case of water. We're asking the community to help us help the less fortunate by making a monetary or water donation to this campaign," United Food Bank President and CEO Dave Richins said.

A major part of the Mesa Hydration Donation Campaign is the One Ton Water Challenge. It was started in 2017 by the City of Mesa, United Food Bank and Mesa Chamber of Commerce. Businesses, residents and organizations are being challenged to buy a pallet of water, which weighs more than one ton, for under $150. A donated pallet of water would contribute approximately 2,016 bottles to the campaign.

"If our Chamber members all stepped up to the challenge or partnered with others to take the challenge it would be a huge success and we would reach our goal of collecting 400,000 bottles of water," Mesa Chamber of Commerce President and CEO Sally Harrison said.

The Mesa Hydration Donations campaign, which began in 2007, is a partnership involving the City of Mesa, nonprofit agencies and businesses to provide supplies of water to those in need. The water is distributed through United Food Bank to numerous nonprofit organizations in Mesa and throughout the valley including Paz de Cristo, Mesa United Way and A New Leaf-East Valley Men's Center.