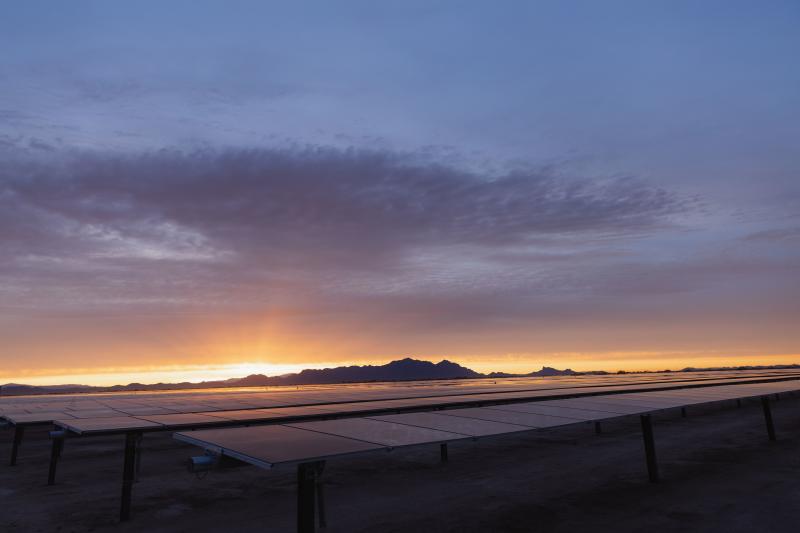 The City of Mesa is among 11 of Salt River Project's (SRP) largest energy consumers who now have the ability to lower overall carbon emissions by receiving a portion of their energy from the sun. SRP has announced the commissioning of Saint Solar, the newest 100-megawatt (MW) solar plant. As part of SRP's ongoing commitment to support customers in achieving their sustainability goals, the new solar plant was initiated by SRP's Sustainable Energy Offering.

"The City of Mesa is always looking for ways to be a little greener," Mesa Mayor John Giles said. "Thanks to SRP's Sustainable Energy Offering, we'll be able to tap into our generous Arizona sunshine and add more solar power to our overall energy mix. Using less coal and natural gas for power is good for the state and for the planet."

"Our partnerships and projects with SRP always look toward a sustainable future and investing in SRP's Sustainable Energy Offering was an easy decision," Mesa City Manager Chris Brady said. "As a municipality, we are always looking at the best ways we can be responsible with our taxpayer dollars. Energy costs are a big part of our monthly expenses, and green, solar energy sources can help fight rising power prices."

Air Products, Albertson's Companies, Inc., Freeport-McMoRan, City of Chandler, City of Phoenix, Cyrus One and Digital Realty are the other large SRP customers participating in the Sustainable Energy Offering.

"From the beginning of this process, discussing an innovative energy offering with a diverse group of customers, to now, experiencing how we jointly take a step closer to achieving our renewable energy goals, is something we recognize is extremely impactful," SRP Associate General Manager and Chief Customer Executive Jim Pratt said. "This is just the beginning of our collective sustainability journey and we are glad to celebrate major milestones applauding those taking part."

Saint Solar, located in Coolidge, Arizona, was built, owned and operated by a subsidiary of NextEra Energy Resources, the world's largest generator of renewable energy from the sun and wind. The project represents an estimated investment of approximately $127 million dollars in Arizona.

"We are proud to partner once again with SRP to bring cost-effective, solar energy to its customers," NextEra Energy Resources Senior Vice President of Development Matt Handel said. "This project will generate clean energy, bring customers closer to their renewable energy goals and at the same time provide significant tax revenue to the community for years to come."

Saint Solar is one of three new Arizona-based solar resources SRP announced it will add as part of its Phase One and Phase Two Sustainable Energy Offering. Earlier this year, SRP announced a total of 33 companies signed up to receive approximately 300 MW of solar energy from these new solar resources, decreasing carbon dioxide emissions by about 1.6 million tons.

About City of Mesa
The City of Mesa's estimated population is more than 518,000 within an incorporated area of approximately 133 square miles. Total land area encompasses 182 square miles. The City ranks as the 35th most populous city in the United States, larger than the cities of Atlanta, Miami, St. Louis, Minneapolis, and Pittsburgh. The area's economy is driven by four major industries: healthcare, education, aerospace and tourism. Mesa was recently named among the 2020 SRP Champions of Energy Efficiency. The City was recognized for updating the lighting and air conditioning at Red Mountain Center and new LED lighting at Fire Station 202.

About SRP
SRP is a community-based, not-for-profit public power utility and the largest provider of electricity in the greater Phoenix metropolitan area, serving more than 1 million customers. SRP is also the metropolitan area's largest supplier of water, delivering about 800,000 acre-feet annually to municipal, urban and agricultural water users.