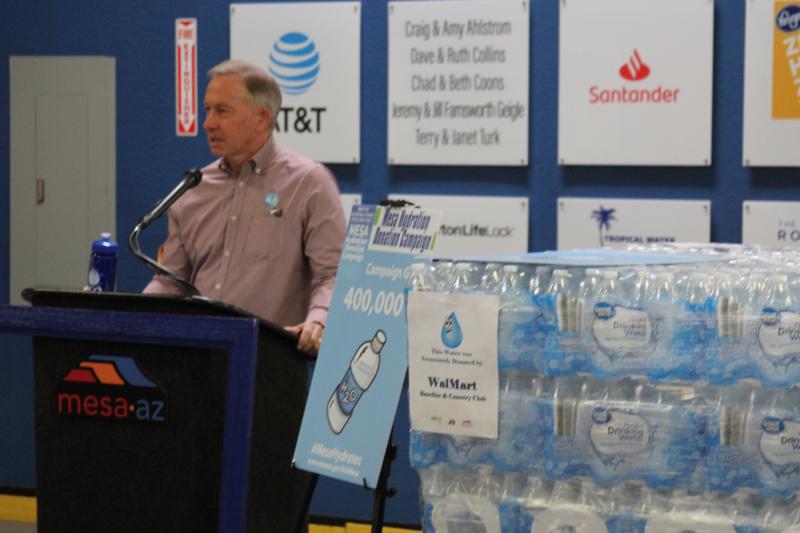 Mesa kicks off Hydration Donation Campaign to save lives

For the past 15 years, the annual Mesa Hydration Donation Campaign has been saving lives during the extreme Arizona heat. City elected officials and community and business leaders are urging the public to join in this annual effort to collect 400,000 bottles of water to help Mesas most vulnerable residents. .

During the pandemic, Mesa residents and community organizations have stepped up to help in so many ways, and I know they stand ready to help as we head into the hot summer months, Mesa Mayor John Giles said. The need for donated water is even greater this year, and Im grateful for the continued generosity of our community to play a part in supporting those in need.

The Mesa Hydration Donation Campaign officially kicked off this morning with a news conference at United Food Bank, which distributes donated water to numerous nonprofit organizations in Mesa and throughout the valley including Paz De Cristo, Mesa United Way and A New Leaf-East Valley Mens Center.

The Hydration Donation Campaign has saved countless lives over the past 14 years thanks to the amazing generosity of our community. Each and every year they step up to help the less fortunate through our hot Arizona summer months and I know 2021 will be no different, Mesa Councilmember and United Food Bank Board Member Kevin Thompson said. Im always impressed at the commitment our local businesses and residents make to this life saving campaign and I know they will show up in force once again with donations of bottles of water.

Since the campaign began in 2007, the Mesa community has donated more than 4.5 million bottles of water.

"Water is a basic necessity for human life. The Hydration Donation Campaign is an easy way to help our vulnerable neighbors during the heat of summer. $5 buys a case of water. I hope the community will step up and help by making a monetary or water donation to this campaign," United Food Bank President and CEO Dave Richins said.

Mesa Hydration Campaign donor Amanda Ferguson contributed 60,000 bottles of water last year in memory of her brother Bill, who died from heat exhaustion in the Arizona desert in August 2013. She is urging others to join in supporting local heat relief efforts.

Im honoring my brother with Bottles for Bill, a new nonprofit group that provides water to lifesaving efforts, like the Mesa Hydration Donation Campaign, while raising awareness of heat dangers, Amanda Ferguson said.

More information about Bottles for Bill is available at www.facebook.com/bottlesforbillaz.

The Mesa Hydration Donation campaign is a stark reminder of the dangers of summer heat in Arizona, which first responders encounter daily.

The risks of dehydration are great for anyone exposed to the triple digit temperatures, especially those who are unsheltered or dont have a place to easily get out of the sun, Mesa Fire and Medical Deputy Chief and Public Information Officer Forrest Smith said. Without donations of water, the outcomes of our emergency responses to cases of dehydration, heat exhaustion or heat stroke would be much worse.

The Mesa Hydration Donation Campaign is a great way for businesses, nonprofit groups and other associations to network and organize efforts to collect cases of water, Mesa Chamber of Commerce President and CEO Sally Harrison said. For the past few years, the Mesa Chamber of Commerce has organized friendly competitions to get water donations and help a great life-saving cause and we are happy to lead the efforts again this summer

Residents can donate water at various drop-off locations throughout the City. The complete list of locations is available at www.mesaaz.gov/H2OMesa. Another way to boost donations is the One Ton Water Challenge. Promoted by the Mesa Chamber of Commerce, United Food Bank and the City of Mesa, it challenges businesses, residents and organizations to buy a pallet of water, which weighs more than one ton, for approximately $150. Individuals can split the cost so its about 75 dollars each. To donate a pallet, contact Melissa Forrester at mforrester@unitedfoodbank.org.

The Mesa Hydration Donation Campaign will be collecting water until Friday, October 1.