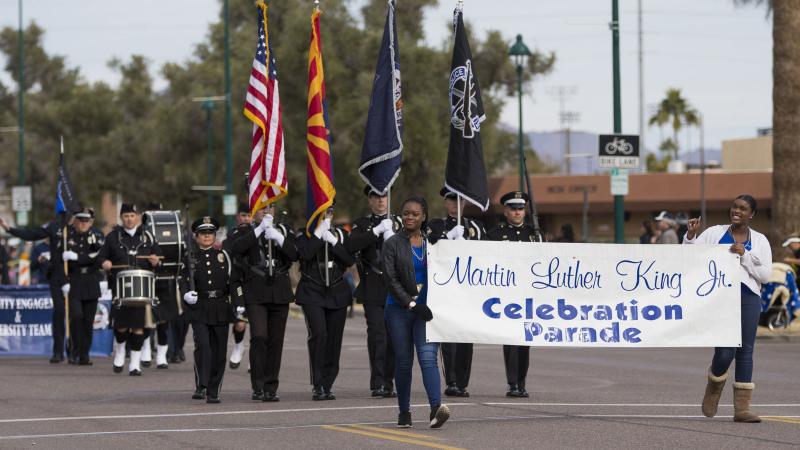 Mesa and its residents pay tribute to the leadership and legacy of Dr. Martin Luther King, Jr. The day of remembrance on Martin Luther King (MLK) Day, Monday, Jan.17 will begin with the East Valley Dr. Martin Luther King Jr. Parade from 11 a.m. to 12 p.m. The parade will start at the intersection of Center Street and MLK Way and will travel south on Center Street to First Street, then travel west on First Street and conclude at Robson. This year's theme is "Tomorrow is Today" and the parade includes marching bands, local organizations, community leaders, elected officials, the Mesa Police Department, and the Mesa Fire and Medical Department.

Following the parade, there will be a community festival from 12 p.m.to 4 p.m. at Main Street and Macdonald featuring food, vendors and kids activities. People attending the festival are encouraged to donate student and school supplies for Step Up Schools in the donation bins at the event. Step Up Charter School is housed in Mesa's Washington Park Activity Center and exists primarily for children in need.

Two of our downtown museums will offer half price admission on MLK Day. The Arizona Museum of Natural History will open from 10 a.m. to 5 p.m. while the i.d.e.a. Museum will be open from 9 a.m. to 4 p.m.

Residents around the parade route or those joining in on the festivities should plan for the following street closures:

Most streets should reopen by 2 p.m. Macdonald, which will be closed between 1st Street and Main Street for the festival, will reopen by 7 p.m. Traffic can detour around the parade route by using Main Street, Mesa Drive, Country Club Drive and University Drive.

Mesa's annual MLK celebrations were created after residents, in 1996, voted to establish a citywide holiday recognizing the leadership of Dr. King. This year's events are the result of a partnership between City of Mesa and the Mesa-East Valley MLK Committee. For more information on the MLK celebrations, visit www.mesaaz.gov/mlkparade