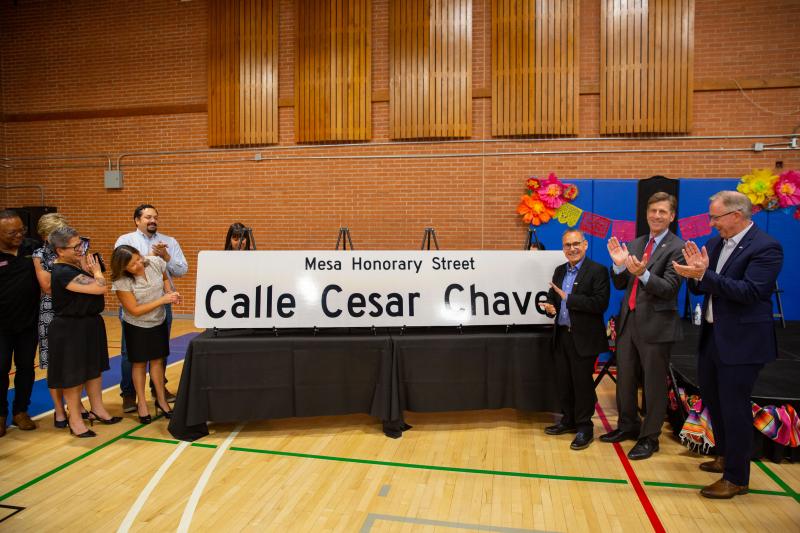 "The vision and legacy of Cesar Chavez serve as guiding lights for Mesa, in our commitment to being a just, equitable and inclusive city," said Mesa Mayor John Giles. "We're pleased to celebrate his civil rights leadership and dedication to fighting for the greater good, and to honor his lineage in Mesa and Arizona."

With the unveiling of the Calle Cesar Chavez signs and planned street route Mesa recognizes the leader's vision for an inclusive and fair society what welcomes and values diversity.

"My grandfather would be humbled and honored by the tribute to him here in Mesa. It is a testament to his passion for civil rights, inclusiveness and for better conditions for American workers," said Julie Chavez Rodriguez, granddaughter of Cesar Chavez. Rodriguez is currently Senior Advisor to the President and Director of the White House Office of Intergovernmental Affairs.

Born in Yuma in 1927, Chavez spent most of his 66 years fighting for better wages and working conditions for farmworkers. His tireless efforts nationwide included three personal hunger strikes. After his passing in 1993, President Clinton awarded him a posthumous Presidential Medal of Freedom, the nation's highest civilian award.

"The street sign displayed here today in Mesa is a reminder of Cesar Chavez, who paved the way for worker rights and an inclusive, accommodating community. Mesa is a place where we welcome and value everyone equally." Said Vice Mayor Duff, " This honorary street sign will be a reminder and point of pride for all of the contributions that all Latinos have made and are making in Mesa."

"The Latino community is rich in voices, culture, and identity. As we dedicate Calle Cesar Chavez with a Mesa Honorary Sign, we demonstrate that Mesa aligns with the messaging of Cesar Chavez." said Councilmember Luna, "I am thrilled that we have gathered together as a community to celebrate the legacy of Cesar Chavez."

The City recently received public comment about the honorary street designation for Calle Cesar Chavez. The honorary signs are in alignment with standard street signs along Broadway and do not require a legal change in access or change in the official street name. The City is also investing in infrastructure and street improvements along this part of Broadway Road.

An honorary street designation will also take place soon along Center Street in downtown Mesa for Dr. Martin Luther King, Jr. Similar designations have been made in other cities locally and nationally to honor historical leaders and strengthen our sense of community.