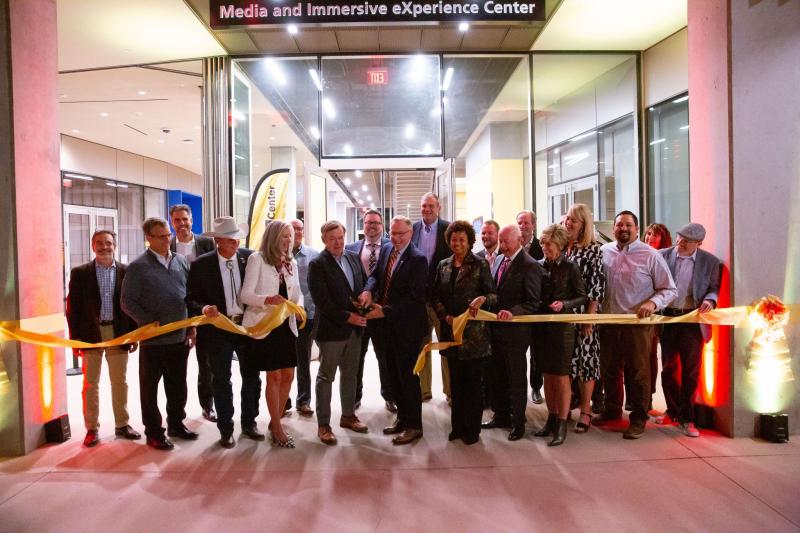 ASU at Mesa City Center is a joint project between the City of Mesa and Arizona State University, which includes two separate buildings, the MIX Center and The Studios, and outdoor plaza space.

The new Media and Immersive eXperience Center (MIX Center) officially opened its doors to students in the fall of 2022 and is expected to put Arizona State University in the top tier of academic filmmaking and media production.

Saturday's free event was a family-friendly housewarming event with performances, demonstrations, food and an evening screening of Disney's Coco on the outdoor 100-foot movie screen.

"Arizona State University is committed to collaborations that support student success while also meeting the needs of the broader communities we serve," said ASU President Michael M. Crow. "We are proud to see ASU at Mesa City Center come to life as a vanguard facility for learning and creativity, and we appreciate the City of Mesa's vision and confidence in advancing opportunities for generations to come."

The weekend's events culminated many years of joint work between the city and ASU. The city invested $63.5 million toward the project and managed the design and construction of the building while ASU contributed $33.5 million, which included interior work and high-end equipment. ASU will pay all operation and maintenance costs for the MIX Center; costs will be shared with the city of Mesa for The Studios.

"This world-class facility is a significant puzzle piece in the evolution of our city's central core, and further solidifies Mesa's Downtown Innovation District as a destination for education, entrepreneurship, and community collaboration," said Mesa Mayor John Giles. "The strong partnership between ASU and the City of Mesa is attracting new businesses and bringing educational programs that will prepare students for the jobs of tomorrow."

The MIX Center hosts hundreds of students who will be making films, designing virtual worlds and creating immersive media experiences. It is capable of producing anything from blockbuster superhero movies to VR video games -- and teaching students the skills they need to succeed in a digital economy.

"It's an exciting time at The Poitier School, and our new home in Mesa is a huge part of that excitement. We pride ourselves on fostering spaces that help empower our students, so they feel confident enough to tell their stories," said Cheryl Boone Issacs, founding director of The Sidney Poitier New American Film School. "At the MIX, whether that story is in film, AR/VR/XR, short-form video or any other type of experiential media, our students will find the state-of-the-art tools they need. And their stories will enrich the cultural life of the university, the state, the region and beyond."

The MIX Center houses The Sidney Poitier New American Film School's production and post-production programs, plus classes in digital media technology, worldbuilding, experience design and gaming from The Design School and the School of Arts, Media and Engineering (both, like the Poitier Film School, part of the Herberger Institute for Design and the Arts), as well as from the Ira A. Fulton Schools of Engineering and the College of Global Futures.

"The MIX Center and the larger ASU at Mesa City Center complex are just at the beginning of their long-term benefits to our students and the Downtown Mesa community. We are thrilled to have this chance to celebrate how far we have already come - a celebration of the good that a university and a city can do together," said Jake Pinholster, associate dean for enterprise design and operations in the Herberger Institute for Design and the Arts.

The Studios at Mesa City Center

The Studios at Mesa City Center is a repurposed mid-century building that houses programming and support services for local community entrepreneurs, facilitated by the J. Orin Edson Entrepreneurship + Innovation Institute. The Studios will help develop entrepreneurs, innovators and small businesses at every stage.

The Studios is housed on the ground floor of a building that was originally the Mesa Public Library and has since been renovated by Mesa in support of ASU's entrepreneurship programs. The Studios and many of the spaces in the MIX Center are fully open to the community, including the fabrication studio. You can read more about ASU's MIX Center in downtown Mesa on ASU News.