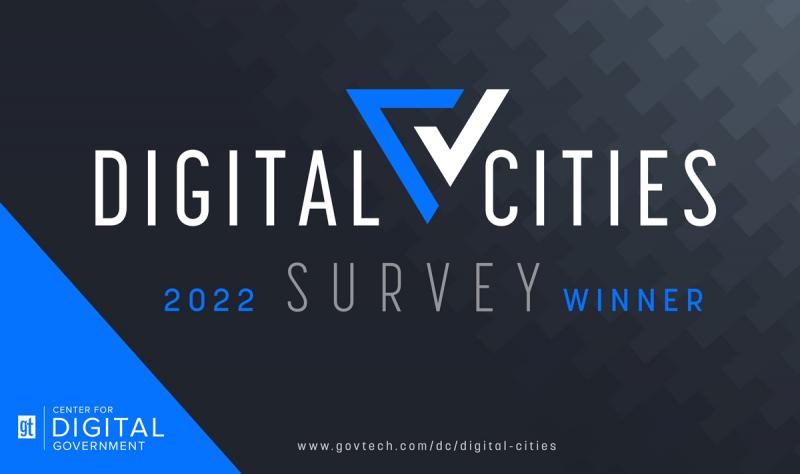 Mesa Named One of Top Digital Cities in U.S.

Mesa has made the top 10 list among cities with populations of 500,000 or more in the Center for Digital Government's 2022 Digital Cities Survey and is the highest-ranked Arizona city in that category. This is the sixth consecutive year Mesa has made the top 10 list and the fifth in the category of 500,000 or more population. The annual survey recognizes cities using technology to tackle social challenges, enhance services, strengthen security and more.

"I am very proud of our employees who have collaborated to make the City of Mesa more secure, user-friendly, efficient and resilient," said City Manager Chris Brady. "Closing the digital divide is a major priority of the City, and their dedication and innovative efforts are making technology a driver of better, smarter and more responsive government as our population continues to grow. This award is a great recognition of that."

Mesa placed 5th among cities in its category, its highest ranking ever. San Diego was rated at the top of the list. Other cities in the top 10 include Los Angeles, San Francisco, Phoenix, Charlotte and Dallas.

As part of the effort to close the digital divide, the City has expanded Wi-Fi in the downtown area and recently signed license agreements with four providers, including Google, to increase internet options for Mesa residents.

The Real Time Crime Center, launched in May 2022, offers a host of innovative technology tools aimed at enhancing public safety.

More City departments are using the chatbot to improve community engagement. Fire and Medical, Police, Animal Control, Municipal Court, Transportation, Licensing and Library now use the tool with plans to add it to the main website. The chatbot has answered two-thirds of the thousands of inquiries it receives, while directing the remainder to staff to follow-up

A partnership with a local recovery company, ER2, gives the City credits for its older computers that are turned over to low-income residents in need of devices.

"The City of Mesa and the other top digital cities are taking the IT department far beyond the role of service provider," said Travis Cutright, Mesa Chief Information Officer. "We are exploring creative ways to leverage our technology investments and redefining the role of the public-sector technology leader at the city level."

The top-10 ranked cities will be honored at an awards dinner during the National League of Cities' annual conference in Kansas City Nov. 17.