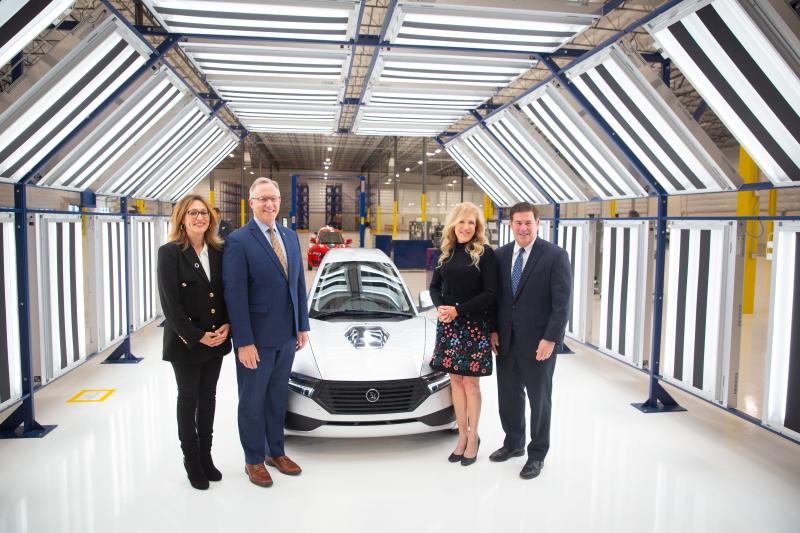 ElectraMeccanica Vehicles Corp. (NASDAQ: SOLO) ("ElectraMeccanica" or the "Company"), a designer and manufacturer of electric vehicles revolutionizing the urban driving experience, together with Arizona Governor Doug Ducey, Mesa Mayor John Giles, the City of Mesa, the Arizona Commerce Authority, local officials and community leaders held a commissioning ceremony today for ElectraMeccanica's nearly-completed manufacturing facility in Mesa, Arizona. The new plant represents a major step for ElectraMeccanica as a business, delivering on its commitment to officially establish the company as an American OEM by the end of 2022 and will serve as the company's new headquarters.

ElectraMeccanica will ultimately have the capacity to produce up to 20,000 vehicles per year in its 235,000-square-foot facility located near the Phoenix-Mesa Gateway Airport at 8127 E. Ray Road, Mesa, Arizona. The campus will also be the home to the company's first U.S.-based engineering technical center, including 22,000-square-feet of office space and 19,000-square-feet of lab space. The company has already activated certain functions, and with this commissioning, it has completed several of the necessary steps to begin ramping up full production. In the medium term, the Company expects to create 200 - 500 jobs in manufacturing, engineering, technology, and more. Currently, the company is licensed to sell its flagship three-wheeled, one-seater, all-electric vehicle, the SOLO and SOLO Cargo, in California and Arizona.

"Arizona is a driving force of innovation, and today's ribbon cutting for ElectraMeccanica is further proof of that," said Governor Ducey. "We are proud of these one-of-a-kind vehicles that will be made in Mesa, bolstering Arizona's robust manufacturing industry. Thank you to the entire ElectraMeccanica team, Sandra Watson and her team at the Arizona Commerce Authority, Mayor Giles and the City of Mesa, and local leaders for your support on this important project."

"We are thrilled to bring production of our vehicles onshore and introduce an enhanced, U.S.-built 2023 model year SOLO EV to market," remarked Susan Docherty, CEO of ElectraMeccanica. "It takes a village to do what we are doing. Bringing our manufacturing facility and vision for our company to life only works if there is a true partnership between local and state government leaders who are committed to economic development, along with solid business partners who share a vision to create products that consumers crave. Our SOLO is a great example of that, making commuting both fun and guilt-free, and we can't wait to put more drivers behind the wheel of this revolutionary vehicle."

The Phoenix metro area has been the fastest-growing region in the U.S. and Phoenix is now the fifth-largest city in America - behind only New York City, Los Angeles, Chicago and Houston. And Mesa is in fact the largest single suburb in the country - itself bigger than all but our largest cities. Both Phoenix and Mesa are home to thousands of businesses, dozens of colleges and universities, retirees, professional sports teams, popular outdoor recreation spaces and more. The community represents the reality of how people actually work, live and play in high-density, urban and suburban environments, which is the exact mobility solution ElectraMeccanica is designing for.

"Today's commissioning ceremony is a tremendous milestone for electric vehicle manufacturing in Arizona," said Sandra Watson, President and CEO of the Arizona Commerce Authority. "We're excited ElectraMeccanica will be manufacturing the unique SOLO EV at its new state-of-the-art facility and look forward to seeing more of these eco-friendly vehicles on roads in 2023."

"We've been looking forward to this day since ElectraMeccanica announced their intention to build this facility in Mesa," said Mayor John Giles. "We're beyond pleased to have one of the leaders in innovative and cost-effective EVs opening their first U.S. facility in our city. Mesa has become a magnet for advanced manufacturing and supply-chain innovation - a thriving ecosystem for ElectraMeccanica's new assembly and engineering facility."

"We're excited to join Governor Ducey, the City of Mesa, Arizona Commerce Authority and ElectraMeccanica to celebrate the commissioning of its new manufacturing facility and U.S. base of operations," said Chris Camacho, President and CEO of the Greater Phoenix Economic Council. "We look forward to seeing the first locally-built SOLO electric vehicle in Greater Phoenix, and supporting ElectraMeccanica as it grows its operation in Mesa."